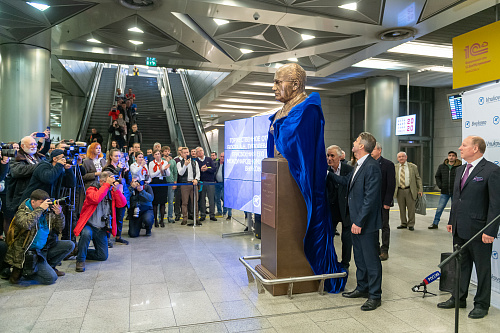 2019.11.08. Moscow. The ceremony of unveiling the bust of Andrey N. Tupolev and naming the airport after the outstanding aircraft designer took place in Vnukovo International Airport.

The event was held just before the 131st anniversary of Andrey N. Tupolev, the legendary Soviet scientist, who stood at the origins of the creation of national aviation and brought it to the world level.

The history of Vnukovo airport is inextricably associated with the name of Andrey Tupolev. It was from Vnukovo that the first passenger flights of Tu-104, Tu-114, Tu-124, Tu-134, Tu-154, Tu-204 and Tu-204-300 were made, and Tu-104, the first passenger jet of Tupolev design bureau, a monument of which is installed at the entrance gate to the airport, became one of the symbols of Vnukovo.

Moreover, Tupolev PJSC in cooperation with Vnukovo airport presented the photography exhibition “Andrey N. Tupolev: ‘I built airplanes for my country’”. The exhibition includes 16 works dedicated to the life and deeds of the great aircraft designer.
Over 100 types of civil and military aircraft, 70 of which were mass produced, have been developed under Andrey N. Tupolev’s leadership. Tupolev and his team were the first in the USSR who designed the all-metal aircraft and intercontinental strategic bomber. Tupolev aircraft were featured in 78 world records, in approximately 30 unique flights, including the flight to rescue the Chelyuskin steamship crew, non-stop flights to the USA via the North Pole, etc.
The name of Andrey N. Tupolev was assigned to Vnukovo Airport in accordance with the Decree of the President of Russia No. 246 "On Naming the Airports after Those with Special Merits to the Motherland" dated May 31, 2019 and after summing up the votes of the All-Russian contest “Great Names of Russia”, in which 6.2 million people, citizens of Russia and compatriots living abroad, took part.

Valery Solozobov, Deputy General Director of Tupolev PJSC: “Andrey N. Tupolev was an outstanding engineer and organizer of aircraft production. He managed to assemble a unique team of highly qualified specialists with whom he created yet unsurpassed military aircraft and civilian airliners. He set up the traditions of the design school, which were then continued by his son, the talented engineer Alexey Tupolev, and now by designers and engineers of our enterprise. The assignment of the name of Andrey Tupolev to Vnukovo airport was a significant event for our entire team. Tupolev civil aircraft carried out flights from Vnukovo over the years. Today, Tupolev airplanes of special air squadron “Rossiya”, which carry out the transportation of top officials of the state, depart from here. I am sure that our joint history with Vnukovo airport will go on and develop”.

Andrey Tupolev, Adviser to the General Director of Tupolev PJSC, Andrey N. Tupolev’s grandson: “This is a very exciting and touching moment for our whole family. Vnukovo airport was emblematic for Andrey N. Tupolev, from here Tu-104 made its first international flight and subsequent Tupolev civilian airliners depart. I am sure the grandfather would be pleased that Vnukovo airport was named in his honor. He always paid great attention to the civil aircraft industry, created outstanding civil aircraft designs on the basis of military aircraft. It was important for him that the airplanes created by him serve people for peaceful purposes; comfortably transport them to different parts of the globe. From my whole family and myself, I would like to thank the leadership of our country, the city of Moscow, Vnukovo airport and Tupolev company for this event, for attention to the history of the development of national aviation and to Andrey N. Tupolev’s role in this history".

Tupolev delivers another Tu-22M3 into operation
We use cookies to collect traffic data, analyze it, select suitable content and advertising for you, and give you the opportunity to share information on social networks. We also transfer information about your actions on the site in an impersonal form to our partners: social networks and advertising and web analytics companies. By continuing to use this site, you agree to the use of cookies in accordance with this notice.
OK