A monument to Tu-144 aircraft is unveiled in Zhukovskiy 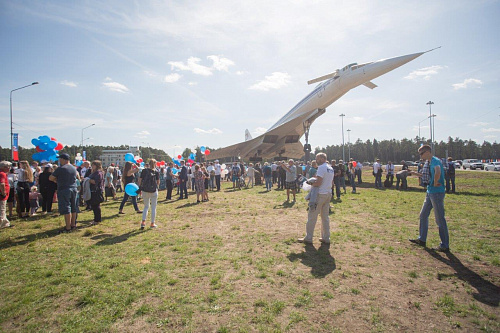 On August 24, a monument to Tu-144, the first passenger airliner in world history to break the sound barrier, has been unveiled in Zhukovskiy near Moscow. It was in this city on December 31, 1968 that the legendary Tu-144 first hit the skies.

The working group to create the monument included representatives of Zhukovskiy administration, Legends of Aviation Charitable Fund, Scientific and Engineering Company, and Tupolev PJSC. Enterprises and organizations of the city of Zhukovskiy and Moscow Region, volunteers of the Air Force Museum in Monino, and test pilots also took part in the project. Specialists of Tupolev PJSC arranged for a preliminary technical examination of the aircraft, provided necessary drawings, made stress and load analyses. In addition, Tupolev’s employees manufactured equipment for transporting and mounting the Tu-144 at the installation site, and took part in the restoration and transportation of the aircraft.

In the future, it is planned to turn the Tu-144 into a museum with a landscaped area, colorful lighting, and a sales point for aviation souvenirs and publications.